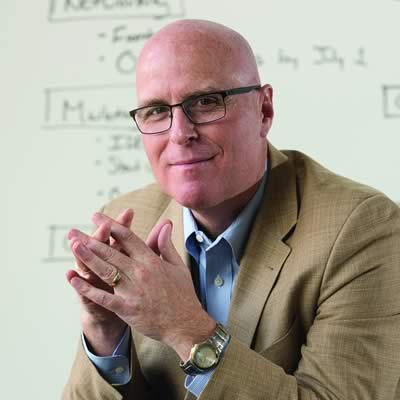 Ritchie’s major responsibilities as head of the IDEA Center include directing the University’s commercialization enterprise, Innovation Park at Notre Dame, a commercial accelerator designed to help Notre Dame researchers and others bring their discoveries to market, and cross-disciplinary entrepreneurship education.

With extensive experience in both industry and the academy, Ritchie came to Notre Dame from the venture capital firm Growth SPORT. As president and CEO, he guided its investing activities, focusing primarily on seed-stage technology companies. Ritchie has formed multiple information technology companies of his own during his career and also held management positions with Century Software, Dayna Communications, IBM, Novell, IOMEGA, Megahertz, and 3Com. He has consulted for Eli Lilly, AstraZeneca, Ericsson, Seagate, Verizon, Givuadan, and over 100 other companies.

Prior to co-founding Growth SPORT, Ritchie spent four years directing technology commercialization at the University of Utah, first as associate vice president for technology venture development and then as associate vice president for research. He oversaw more than 60 new startups, more than $700 million in investment and grants, an average of 90 licenses per year, and 90+ patents per year.

From 2001-2011 Ritchie was a professor of Political Economy and Entrepreneurship at Michigan State University. He published extensively on the political economy of innovation and technology development and was recognized multiple times for his excellence in teaching.

Ritchie is a graduate of the University of Nevada, Las Vegas, and holds an M.B.A. from Brigham Young University and a Ph.D. in political economy from Emory University. As a member of the faculty at Michigan State University, he rose from assistant to associate to full professor of political economy and was part of the core faculty of the Asian Studies Center. In addition, he served as director or co-director of two student entrepreneurship programs and as associate director for external strategy of the MSU BioEconomy Network, which coordinates the university’s initiatives to promote Michigan’s bioeconomy through research, policy and economic analysis, education, corporate and government collaborations, and commercialization.

Fluent in Thai and conversant in several other Asian languages, Ritchie is the author of two books: Systemic Vulnerability and Sustainable Economic Growth: Skills and Upgrading in Southeast Asia and, with MSU’s Lindon Robison, Relationship Economics: The Social Capital Paradigm and its Application to Business, Politics, and Other Transactions.