The University of Notre Dame began late on the bitterly cold afternoon of November 26, 1842, when a 28-year-old French priest, Rev. Edward Sorin, C.S.C., and seven companions, all of them members of the recently established Congregation of Holy Cross, took possession of 524 snow-covered acres that the Bishop of Vincennes had given them in the Indiana mission fields.

A man of lively imagination, Father Sorin named his fledgling school in honor of Our Lady in his native tongue, “L’Université de Notre Dame du Lac” (The University of Our Lady of the Lake). On January 15, 1844, the University was thus officially chartered by the Indiana legislature.

Strong connections exist between Notre Dame’s founding and early life and today’s University. While this is especially true of its roots in the Catholic intellectual tradition, it’s also observed in some lesser-known moments in history that show how Notre Dame has carried out its mission as a residential campus where scholars have pursued their inquiries for more than 175 years. The research taking place here and the spirit that exists here are reflections of a past marked by firsts and faith. 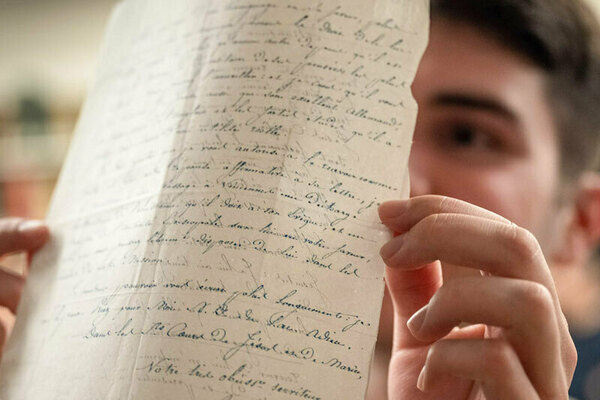 In 50 years of overlooked letters, French class discovers new insights into Father Sorin and the early days of Notre Dame