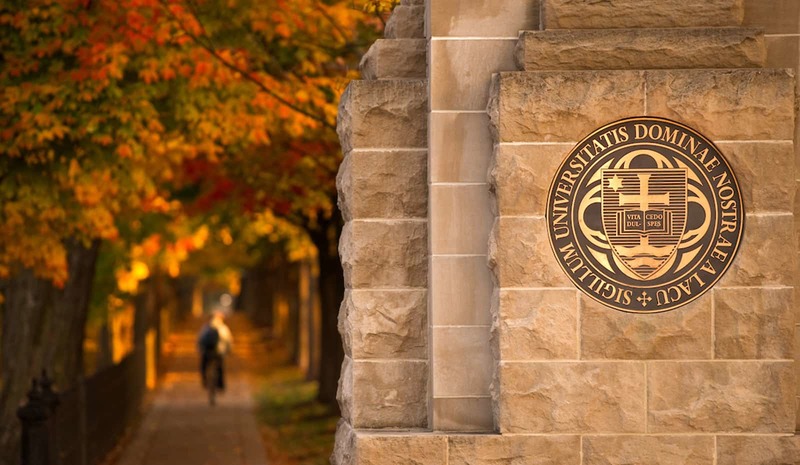 Notre Dame at a Glance

Notre Dame is a place born of vision and defined by its Catholic character.

The University of Notre Dame was founded in November 1842 by Rev. Edward F. Sorin, C.S.C., a priest of the Congregation of Holy Cross, a French missionary order. It is located adjacent to South Bend, Indiana, the center of a metropolitan area with a population of more than 300,000. Chartered by the state of Indiana in 1844, the University was governed by the Holy Cross priests until 1967, when governance was transferred to a two-tiered, mixed board of lay and religious trustees and fellows.

Notre Dame has grown from the vision of Father Sorin, who sought to establish a great Catholic university in America, and has remained faithful to both its religious and intellectual traditions. Over the years, Notre Dame has been a place where the Catholic Church could do its thinking. The first national study of Catholic elementary and secondary education was done at Notre Dame, as was the most extensive study of Catholic parish life and a landmark historical study of the Hispanic Catholic community in the United States.

One of America’s leading undergraduate teaching institutions, Notre Dame also has been at the forefront in research and scholarship. The aerodynamics of glider flight, the transmission of wireless messages, and the formulae for synthetic rubber were pioneered at the University. Today researchers are achieving breakthroughs in astrophysics, radiation chemistry, environmental sciences, tropical disease transmission, peace studies, cancer, robotics, and nanoelectronics.

Notre Dame always has been heavily residential, with about four in five undergraduates living on campus. Students come to Notre Dame to learn not only how to think but also how to live, and often the experiences alumni carry from residence hall communities at Notre Dame remain vivid over a lifetime. The University always has attracted scholars who are interested in teaching and scholarship, men and women who know that a Notre Dame education is more than what is taught in classrooms and laboratories.

Notre Dame has a unique spirit. It is traditional, yet open to change. It is dedicated to religious belief no less than to scientific knowledge. It has always stood for values in a world of facts. It has kept faith with Father Sorin’s vision. “This college will be one of the most powerful means for doing good in this country.”

Notre Dame is ranked in the Top 25 institutions of higher learning by U.S. News & World Report, Forbes, Niche, and others.

Notre Dame is a Top 10 collegiate workplace according to the Chronicle of Higher Education.