Congregatio a Sancta Cruce (C.S.C.), translated from Latin, means Congregation of Holy Cross. Why “Holy Cross”? In French, it is Sainte Croix, the small French town outside Le Mans where Rev. Basil Moreau, C.S.C., founded a community of Roman Catholic priests and brothers in 1837 to minister to and educate the people of France devastated by the French Revolution.

The Cross soon became an integral part of the Congregation’s spirituality. Fr. Moreau exhorted his religious to conform themselves to Christ by trusting in Divine Providence. He encouraged them to find hope in the Cross of self-emptying love, to stand by others as the Mother of Sorrows stood by her son. For this reason, he dedicated the entire Congregation to Our Lady of Sorrows, naming her the patroness. The motto of the Congregation is Ave Crux, Spes Unica, which means “Hail the Cross, Our Only Hope”—calling on the community to “learn how even the Cross can be borne as a gift” and to bring this hope to others.

Fr. Moreau envisioned his young Congregation as a family brought together in Eucharistic fellowship united in a common mission to educate and evangelize. This missionary zeal “to make God known, loved, and served” is why Fr. Moreau, just five years after founding the Congregation, sent six brothers and a young Rev. Edward Sorin, C.S.C., to the “New World.” This, of course, led to the establishment of the Congregation’s first educational institution in America and one of the world’s most renowned Catholic higher education institutions—the University of Notre Dame.

Fr. Moreau called on his priests and brothers to be “educators in the faith,” in the education, parish, and mission settings that the Congregation would soon establish around the world.

“We shall always place education side by side with instruction; the mind will not be cultivated at the expense of the heart. While we prepare useful citizens for society, we shall likewise do our utmost to prepare citizens for heaven.”

From the Congregation’s founding, Holy Cross priests and brothers have always lived side by side with students, demonstrating the rewards of living a faith-filled life. Fr. Sorin established this model at Notre Dame and it lies at the heart of the student experience. Whether it’s lending a listening ear after an evening residence hall Mass, instructing a course, or serving in other roles for the University, the priests and brothers of Holy Cross are living out Fr. Moreau’s vision today, more than 175 years later, “making God known, loved, and served” with apostolic zeal, bringing hope to the entire Notre Dame community and beyond! 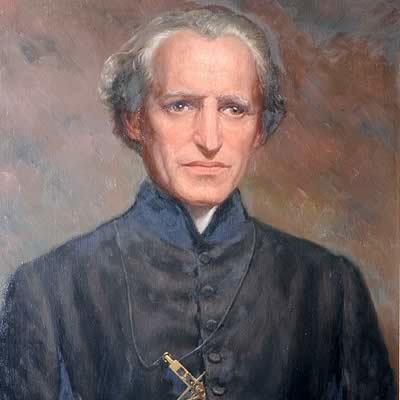 The founder of the Congregation of Holy Cross, Basile-Antoine Marie Moreau (Basil Anthony Marie Moreau in English) was born in Laigné-en-Belin, in the diocese of Le Mans, France, on February 11, 1799. He was ordained in 1821 as a priest for the Diocese of Le Mans. On March 1, 1837, Fr. Moreau merged a group of auxiliary priests and teaching brothers, forming the Congregation of Holy Cross. Fr. Moreau’s vision of a Holy Family was complete when he brought sisters into the Congregation. Although the sisters eventually formed their own congregation, Fr. Moreau is still honored as the founder by the spiritual descendants of these women, who are known in France as Marianites, in Canada as the Sisters of Holy Cross, and in the United States as the Sisters of the Holy Cross. This latter group established Saint Mary’s College in Notre Dame, Indiana.

The Congregation of Holy Cross includes about 1,200 religious around the world. The United States Province of Priests and Brothers is headquartered in Notre Dame, Indiana, and its membership includes approximately 500 men, including those in formation. The U.S. Province has education, parish, and mission ministries on three continents and seven countries.

Along with the University of Notre Dame, Holy Cross, U.S. Province priests and brothers are educators in the faith at three other colleges and universities:

The Province has 13 parishes in the United States: Arizona, Colorado, Florida, Indiana (5), Massachusetts, Oregon (2), Texas, Vermont. Sacred Heart Parish was founded together with the University of Notre Dame in 1842.

True to Fr. Moreau’s vision, the United States Province’s mission work spreads beyond the geographical boundaries of North America. International mission work reaches into Chile, East Africa (Uganda, Kenya, Tanzania), and Perú, as well as the region of México. Globally, the U.S. Province’s Holy Cross Mission Center supports the international mission work of the worldwide efforts of the Congregation of Holy Cross, spanning 16 countries on five continents. It also directly supports those international locations for which the U.S. Province has direct jurisdiction and those countries with which the U.S. Province has a special relationship. Through the Mission Center’s Overseas Lay Ministry Program, recent Notre Dame graduates have opportunities to serve with Holy Cross in either Chile or Uganda. 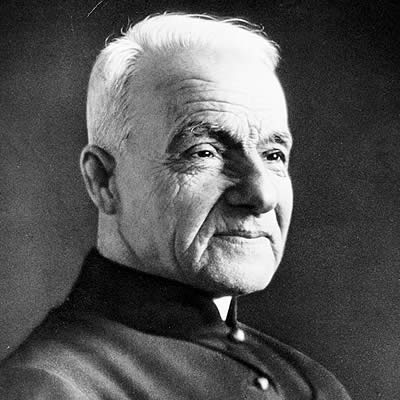 The Congregation of Holy Cross joyously celebrated the canonization of its first saint, Br. André Bessette, C.S.C., on Oct. 17, 2010, by Pope Benedict XVI. Br. André started as a humble doorkeeper at the College of Notre Dame in Montreal, Canada, but became known to the world as the “Miracle Worker of Montreal” for devoting his life to prayer, serving the Lord, and comforting the sick. Through his intercession prayers to St. Joseph, many received God’s healing power. The Feast Day of St. André is celebrated in the United States on January 6. 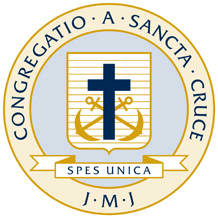 The community's seal is the cross and anchors and its motto, Ave Crux Spes Unica: Hail the Cross, Our Only Hope.