Notre Dame is located adjacent to South Bend, Indiana, the state’s fourth-largest city and part of the South Bend-Mishawaka-Elkhart metropolitan area, with a population of more than 300,000.

Like many Midwestern cities, South Bend’s history includes a period of heavy reliance on industry, most famously as the center of manufacturing for Studebaker automobiles. While the area still boasts notable industrial strengths (such as the booming recreational vehicle manufacturing found in neighboring Elkhart), the South Bend of today is characterized by smart growth and 21st-century innovation that marks a re-emergence from past economic distress.

The most poignant symbol of this rebirth may be the aptly named Renaissance District on the south side of South Bend’s downtown, billed as the Midwest’s largest mixed-use technology campus. Here, tech start-ups are filling the buildings once used by Studebaker before it closed in the 1960s. It’s part of a broader pattern of change brought on in part by exponential growth in private investment, which has revitalized vast swaths of South Bend with hotels, restaurants, and luxury housing.

Notre Dame has played a role in these developments in various ways, as its investments in research and commercialization have helped to create a growth-friendly environment. The University has partnered with South Bend and the community in other ways as well, such as the groundbreaking Smart Sewer systems, which use technology developed at Notre Dame and are now in use in dozens of cities worldwide. In 2015, the University helped secure a $42 million grant from the Indiana Economic Development Corporation for St. Joseph, Elkhart, and Marshall counties. In addition, studies show the University contributes $2.46 billion to the local economy each year.

The region has always been home to outstanding arts, entertainment, and recreation. The Morris Performing Arts Center downtown and Notre Dame’s own DeBartolo Performing Arts Center draw top national acts throughout the year. Near the Renaissance District sits Four Winds Field, home to the South Bend Cubs, the AAA affiliate of the Chicago Cubs. In addition, Notre Dame’s campus is less than an hour’s drive to the beaches of Lake Michigan, where charming coastal communities offer shopping and relaxation.

Closer to campus, Eddy Street Commons continues to shine as an example of an effective public-private enterprise. The mixed-use dining, residential, and shopping hub is the result of a partnership between the City of South Bend and the University and is a popular spot year-round. Just a few miles from campus is a large retail corridor that includes University Park Mall, Heritage Square, and several shopping and dining options. 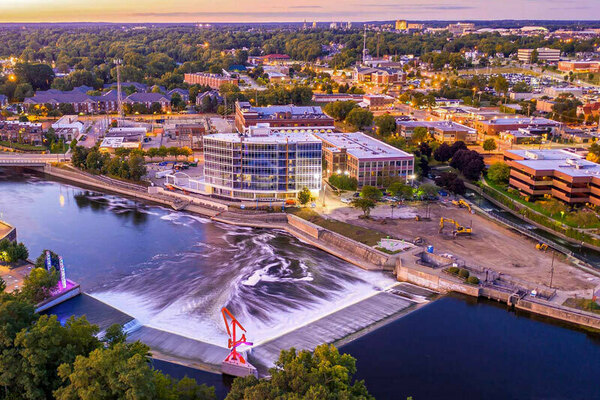 Looking to the Past to Power the Future