Forty years ago, Rev. Theodore “Ted” Hesburgh, C.S.C., then president of the University of Notre Dame, first visited China as part of an effort to build bridges with leaders in higher education that could lead to better relations between East and West. 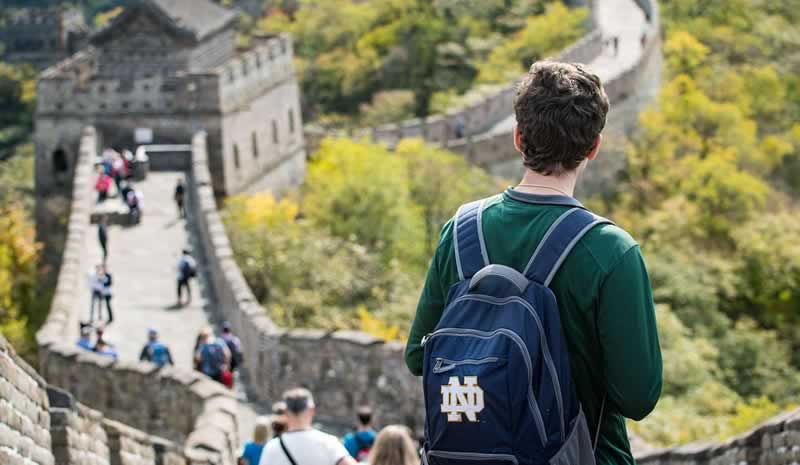 In an ever-shrinking world, Notre Dame seeks to approach problems in context.

At the time, China was enduring the lingering effects of World War II and the revolution that followed, and was only beginning to recover from the Cultural Revolution, an anti-intellectual movement that represented a significant setback for China’s modernization efforts.

In the four decades since, China has grown into a modern industrial and technological power, and successive Notre Dame leaders and faculty members working with Chinese colleagues and alumni in China have built partnerships, collaborations and exchange programs with many of China’s most prominent universities.

As he makes his 11th such visit to China, Notre Dame Charles and Jill Fischer Provost Thomas Burish reflected on the progress he has witnessed.

“Our early visits were primarily intended to help people understand Notre Dame’s distinctiveness as a Catholic research university,” Burish said. “We can now focus more on reconnecting with higher education leaders, renewing friendships with Notre Dame alumni and parents, and discussing how to further existing programs and explore new opportunities for collaboration.”

Burish said this shift represents real progress in Notre Dame’s effort to become a more international and global university, progress he attributes to the hard work of many faculty and staff members over several years.

With stops in Shanghai, Beijing and Hong Kong, Burish’s final visit as Notre Dame provost is intended to build on those relationships and reinforce the University’s ongoing and continued commitment to its partnerships in China.

During the visit, Burish plans to meet with parents, alumni and supporters at all three stops, and speak with students and faculty members at the University of the Chinese Academy of Social Sciences and at Peking University. He also will meet with China’s Ministry of Education and the U.S. ambassador to China, Terry Branstad.

A major focus of this trip is celebrating the success of the Greater China Scholars Program, which since 2011 has brought more than 70 undergraduate students from across China to Notre Dame. Graduates of the program have continued their education at other prestigious universities in the United States, and others have gone on to start successful careers throughout the world.

“The Greater China Scholars Program, along with other programs that bring Chinese students to our campus, helps broaden awareness of Notre Dame in China,” said Miranda Ma, who oversees the program. “It also demonstrates the success of the many excellent Chinese students who have attended our University.”

In China, Notre Dame established a Beijing office in 2010. It has since been expanded into the Beijing Global Gateway and joins four other Notre Dame global gateways in Dublin, Jerusalem, London and Rome as hubs for global education and international research. This trip also comes on the heels of the blessing of the Liu Institute for Asia and Asian Studies, which is dedicated to the advancement of research and education about Asia on the Notre Dame campus.

“Many of the world’s most pressing concerns know no national boundaries.”

“During the past 10 years, the establishment of the Liu Institute for Asia and Asian Studies, in addition to the creation of Notre Dame International’s Beijing Global Gateway and Hong Kong Global Center, have deeply transformed both the University’s faculty expertise about Asia as well as Notre Dame’s level of engagement with Asia,” said Jonathan Noble, Notre Dame International’s senior assistant provost for internationalization. “The Notre Dame community in China has been very supportive of these efforts.”

While the focus of the trip is on promoting future collaboration and opportunities, Burish’s visit is taking place in an environment of increased tensions between the United States and China over issues ranging from trade and national security to the threat of espionage in higher education.

Burish said that each side has and is entitled to its own perspective on issues including trade, economic competitiveness and national security.

At the same time, his aim is to ensure university partners, alumni and friends in China know that Notre Dame remains committed to the vital role that higher education plays in promoting international understanding and stability.

“Many of the world’s most pressing concerns know no national boundaries,” Burish said. “Finding solutions to these challenges requires international collaboration and research partnerships, and we want our partners in China to know that we remain committed to scholarly engagement and cooperation throughout the world.”

Burish said he wants to ensure Notre Dame continues welcoming students and scholars from China and other countries to the University while also sending its students and faculty members to places throughout the world, including Beijing and other parts of China.

Amid cooling relations between the United States and China, Notre Dame students, parents, alumni and friends gathered in Shanghai on Oct. 21 to celebrate a partnership in higher education that has grown ever-stronger and more important during the past four decades.

The occasion was a visit by Burish, who is in China this week to reinforce Notre Dame’s commitment to higher education partnerships with Chinese universities.

Burish’s visit builds on the vision of Father Hesburgh.

“Father Ted knew back then — as we do now — that no university can be a great university unless it is a global university.”

Burish’s visit to Shanghai included a visit to the Jade Buddha Temple and a guided tour hosted by Notre Dame alum Yue Huang (’15) and his parents. It was a fitting tribute to the anniversary of Father Hesburgh’s visit, as Yue was the first Chinese-born Hesburgh-Yusko Scholar to attend Notre Dame.

Provost Burish started by paying a call on the leadership of the University of the Chinese Academy of Social Sciences, followed by an hour-long talk with students at the school. During the talk, and the question and answer session that followed, Burish provided an overview of Notre Dame to the English-speaking Chinese students and described the University’s distinguishing approach to undergraduate education as one focused on developing the whole person – a student’s mind, heart, and body.

In a wide-ranging roundtable meeting with graduate students at Peking University’s Yenching Academy, Burish discussed the need for international collaboration in higher education as a way to address global challenges such as poverty, climate change, sustainability, and aging populations. The group included students from countries including China, South Korea, Nigeria, Ghana and India, as well as two recent Notre Dame graduates, Lily Falzon ’18 and Emily Vincent ’18. Falzon and Vincent are the latest of six Notre Dame graduates accepted to attend the highly selective academy since its founding in 2014.

Later, at China’s Ministry of Education, Burish was warmly greeted by Xu Yongji, deputy director general for the Department of International Cooperation and Exchange, who was well-versed in Notre Dame’s academic involvement in China and expressed a sincere desire to further strengthen higher education relations and partnerships with Notre Dame.

Though it is always risky to predict the future, Notre Dame’s successful efforts to build higher education bridges in China during the past decade are cause for optimism.

Despite current strains on U.S.-China relations, there is strong and growing support among parents, alumni and friends, as well as university and government officials in China, for Notre Dame and its mission.

Time and again this week, during Burish’s 11th visit to China in the past 15 years, supporters and friends offered not only their gratitude for the significant progress that has been made, but also their future support and optimism.

Burish, who at the direction of Notre Dame President Rev. John I. Jenkins, C.S.C., has served as the University’s ambassador in Asia, credits the progress to the hard work of many people in Notre Dame International, the Keough School of Global Affairs and many others.

“I think that our students, our faculty will have an enormous impact on the rest of the world. They’ll be a force for good in the world,” Burish said. “My experience over the last 15 years has suggested that that message is welcome, it’s believed, and more and more, it will have an impact.”

Produced by the Office of Public Affairs and Communications