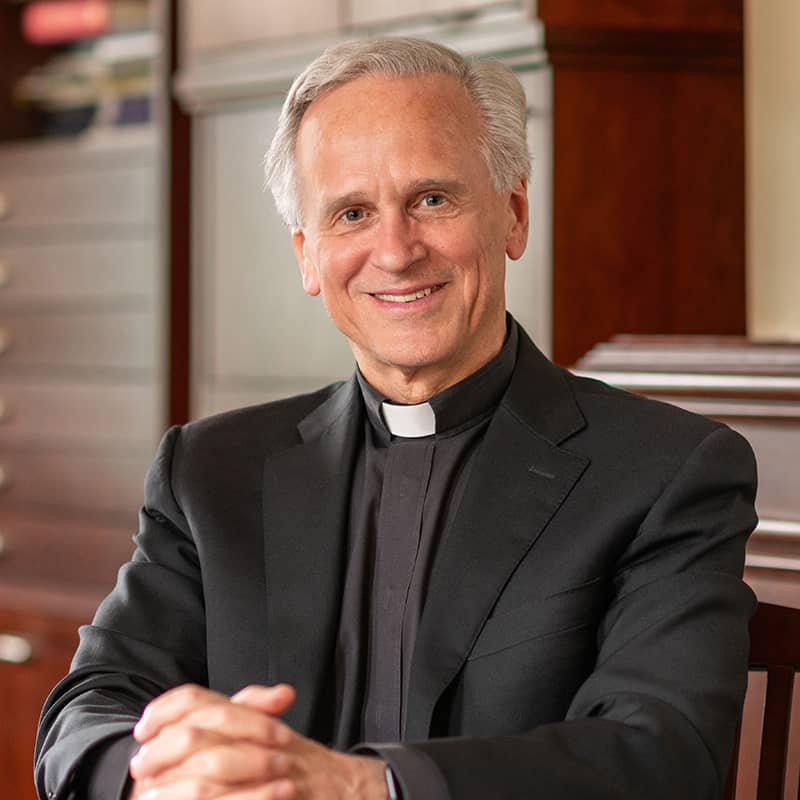 Office of the President

Elected in 2005 as the University of Notre Dame’s 17th president, Rev. John I. Jenkins, C.S.C., was re-elected by the Board of Trustees to a fourth five-year term, effective July 1, 2020.

As president, he has devoted himself to fostering the University’s unique place in academia, the Church, our nation, and the world.

Father Jenkins has been committed to combining teaching and research excellence with a cultivation of the deeper purposes of Catholic higher education. While pursuing academic distinction, he has brought renewed emphasis to Notre Dame’s distinctive mission, rooted in the tradition of the Congregation of Holy Cross, the University’s founding community, to educate the whole person—mind, body, and spirit—to do good in the world.

These commitments have been made manifest in the University’s dedication to excellence in undergraduate education in the classroom and beyond, while simultaneously building a reputation as a preeminent research institution—all in the context of Notre Dame’s Catholic identity.

In June 2019, the University and the Vatican co-sponsored a conference in Rome titled “The Energy Transition and Care for Our Common Home.”   Pope Francis and Cardinal Peter Turkson, prefect of the Vatican’s Dicastery for the Promotion of Integral Human Development, addressed conference attendees, as did Father Jenkins.  At the conclusion of the conference, most of the executives from among the world’s leading energy producers and investors signed statements in support of carbon pricing and disclosures on climate change risk.

Most recently, Fr. Jenkins has directed the University’s ongoing efforts to protect the health and safety of the University community amid the challenges of the coronavirus pandemic while carrying forward the University’s mission of scholarship and discovery. Among many decisions, he suspended in-person classes in March 2020, then announced the resumption of primarily in-person instruction on campus for the 2020–21 academic year.

Construction of new academic buildings and residence halls as well as other investments in the University’s infrastructure, scholarly programs, and international reach during Father Jenkins’s tenure have helped Notre Dame to solidify its stature as one of the nation’s leading universities, and to advance his vision of making it “one of the preeminent research institutions in the world, a center for learning whose intellectual and religious traditions converge to make it a healing, unifying, enlightening force for a world deeply in need.”

As a result of these efforts, Notre Dame has been highly competitive in recruiting the best students, faculty, and staff and in attracting more than $220 million in fiscal year 2021 in outside research funding. Recent research initiatives include the completion of the country’s largest quiet Mach 6 hypersonic wind tunnel; the development of the Notre Dame Turbomachinery Laboratory, a public-private partnership that studies and tests new gas turbine engine technologies; the use of nanotechnology to address climate change and post-silicon computer technology; and nuclear physics research on the evolution of our cosmos. On a global scale, two Notre Dame biologists are leaders of a $23 million grant from the Bill & Melinda Gates Foundation in the fight against malaria and dengue fever.

In the 2017–18 academic year, Notre Dame completed the largest construction project in its history with the opening of the 770,000-square-foot Campus Crossroads Project, in which leading-edge teaching, research, student life, hospitality, performance, and digital technology buildings were built around the exterior of Notre Dame’s iconic football stadium. The additions have brought students, faculty, and others engaged in scholarly, artistic, and athletic pursuits in close proximity while optimizing underused space to preserve the pedestrian character of the Notre Dame campus. Among many other campus construction projects, Notre Dame in the winter of 2019 opened the Walsh Family Hall of Architecture and in the fall of 2017 opened Jenkins and Nanovic Halls, the new home to the Keough School of Global Affairs and the Departments of Sociology, Political Science, and Economics.

Father Jenkins has also strengthened Notre Dame’s relationship with the South Bend community in tangible ways, including leadership in the Indiana Regional Cities Initiative, which brought $42 million to the three-county region for economic development projects; formation of the Labs for Industry Futures and Transformation, which will enhance and link cutting-edge expertise, technologies, workforce development programs, and innovation-based facilities through the surrounding communities with a $42.4 million award from Lilly Endowment Inc.; support and staffing of the Robinson Community Learning Center, a learning center and gathering space for the community now in new quarters just south of the campus; construction of the mixed-use commercial and residential Eddy Street Commons project; and the expansion of the IDEA Center at Innovation Park where technology-driven research helps to create jobs locally. Notre Dame’s local economic impact amounts to approximately $2.5 billion annually and the direct and indirect employment of some 16,700 people.

All of these advances, Father Jenkins said, “would not be possible without outstanding students and faculty, the skill and dedication of our executive team, the guidance of our Trustees along with their generosity and that of alumni and other friends, as well as the careful stewardship of our resources.”

Recognizing the high cost of education, the University under Father Jenkins’s leadership has continued to increase financial aid, providing assistance to students with demonstrated need. The University provides more than $180 million in aid for undergraduates, a total that has more than doubled in the past decade. Nearly 70% of all students receive such aid, which does not require repayment, and the median grant for first-year students in 2021 is $50,000.

Under Father Jenkins’s leadership, Notre Dame has increased the diversity of its student population, achieving the highest percentage of students from underrepresented groups in the University’s history. He leads the President's Executive Diversity Council to sustain focus on this important issue across the University.

Within the University and beyond, Father Jenkins has called for civil discourse—grounded in the Christian view of others as equally made in the image of God—as a way to find common ground rather than demonize those with different opinions. In a speech at Emory University in 2011, he said: “If we choose to attack our opponents before we have taken the time to understand them, if we prefer denunciations to genuine dialogue, if we seek political victory rather than constructive compromise … we will not be able to find solutions to the problems before us.”

The Commission on Presidential Debates, a nonpartisan, nonprofit organization that sponsors and produces all U.S. presidential and vice presidential debates, cited his leadership on this issue in electing Father Jenkins to its board of directors in 2011.

A philosopher trained in theology and a member of Notre Dame’s Department of Philosophy since 1990, Father Jenkins earned undergraduate and advanced degrees from Notre Dame, a doctorate of philosophy from Oxford University, and a master of divinity and licentiate in sacred theology from the Jesuit School of Theology at Berkeley.

Prior to assuming the presidency, Father Jenkins was vice president and associate provost of Notre Dame. A recipient of a Lilly Teaching Fellowship in 1991–92, he is the author of the book Knowledge and Faith in Thomas Aquinas, and of numerous scholarly articles published in The Journal of Philosophy, Medieval Philosophy and Theology, and the Journal of Religious Ethics. He is the author of op-eds that have appeared in the New York Times, The Wall Street Journal and other prominent publications.

Father Jenkins was elected a member of the American Academy of Arts and Sciences in 2010, and a year later appointed to the academy’s Commission on the Humanities and Social Sciences, which is dedicated to the advancement of teaching and research in these disciplines. A popular teacher, he has taught courses on ancient and medieval philosophy, faith and reason, and Thomas Aquinas.

Fr. Jenkins is a member of the Commission on Presidential Debates, and has served on the Independent Commission on College Basketball led by Dr. Condoleeza Rice and on the Association of Catholic Colleges and Universities board of directors. He is a recipient of the Ellis Island Medal of Honor, awarded to those demonstrating outstanding qualities in their personal and professional lives, while maintaining the richness of their ethnic heritage. He was also the 2009 recipient of the American Irish Historical Society’s Gold Medal, and in 2015 he received the Spirit of Francis National Award from Catholic Extension for supporting and encouraging future leaders of the Catholic Church throughout his career.

Office of the President 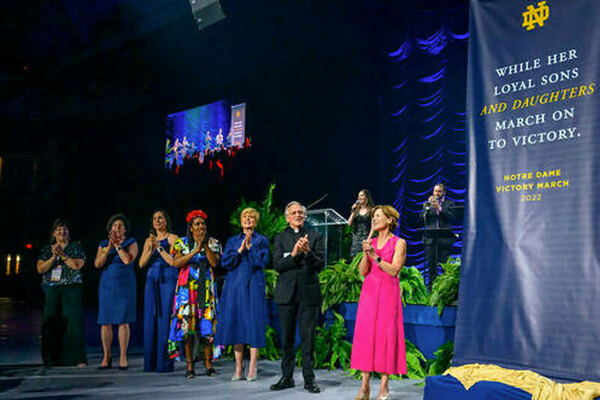